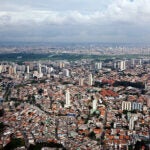 Harvard Kennedy School has received a $5 million gift to establish the James M. and Cathleen D. Stone Program in Wealth Distribution, Inequality, and Social Policy at the School’s Malcolm Wiener Center for Social Policy. The new Stone Program, which builds on the success of the Stone Ph.D. Scholars, will unite faculty, students, and researchers from across Harvard University and beyond to better understand and address the causes and consequences of wealth inequalities in different populations around the world. The announcement of this gift on March 28 coincided with the James M. and Cathleen D. Stone Lecture in Economic Inequality, featuring economist and Nobel Memorial Prize recipient Joseph Stiglitz in conversation with economist David Autor.

Funded by the James M. and Cathleen D. Stone Foundation, the program will include the work of the Multidisciplinary Program in Inequality and Social Policy and add new components, including a consortium of doctoral students in the social sciences whose research focuses on income and wealth inequality; policy-relevant and public-facing research that speaks to real-world problems; and public events to communicate research and engage members of the broader community.

“Income inequality and concentrated wealth can leave many people at economic and social disadvantage,” said Douglas Elmendorf, dean and Don K. Price Professor of Public Policy at Harvard Kennedy School. “Appropriate public policy to create a fairer economic system can provide economic opportunity and mobility for people currently deprived of such prospects. The establishment of this program by Jim and Cathy Stone will allow the Kennedy School to build a critical mass of scholars creating evidence-based approaches to this crucial challenge.”

Beyond its core components, the Stone Program will expand the reach and impact of its research with a rotating mix of high-profile visiting scholars and a nimble grant program to enable researchers to start projects quickly and efficiently.

“We are delighted to help Harvard Kennedy School expand its work on the causes and consequences of increasing wealth inequality. Taken to its extreme, the trend toward excessive wealth concentration can carry society away from meritocracy, productivity, empathy, mobility, and democratic ideals,” said Jim Stone. Cathy Stone added, “The Kennedy School, with its distinguished interdisciplinary faculty, has a special opportunity and role to play in addressing this issue.”

“The new Stone Program will position Harvard to be at the forefront of studying and researching inequality,” said Maya Sen, faculty director of the James M. and Cathleen D. Stone Program in Wealth Distribution, Inequality, and Social Policy. “We are thrilled to be able to build on our existing strengths while also helping push the boundaries of research and scholarship with the exciting new opportunities afforded by the Stone Program.”