HKS’ Calestous Juma among the 100 Most Influential Africans for 2016 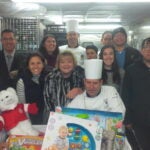 Calestous Juma, professor of the practice of international development at Harvard Kennedy School (HKS), has been named among the 100 Most Influential Africans for 2016 by New African magazine.

Juma, whose research and writing focus on science, technology and the environment, is considered a top thought leader in relation to African agriculture and economic development. He serves as director of the Science, Technology, and Globalization Project at HKS’ Belfer Center for Science and International Affairs and faculty chair of the Mason Fellows Program.

“This year, we celebrate those Africans who made an impact and made their mark in a challenging year,” wrote the magazine editors. “In compiling this year’s list, we sought the guidance of some of the most influential experts and global thought leaders in their respective fields.”

Juma wrote that he was surprised by the honor since he had been named to the list three previous times. “I thought they were done with me,” he said.

But Juma acknowledged that the work he is doing in the field of African education will help the continent shape policies for generations to come.