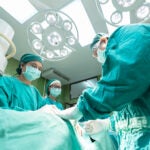 Higher blood concentrations of vitamin D are linked to a lower risk of colorectal cancer, especially in women, according to a large new study from researchers at Harvard T.H. Chan School of Public Health, the National Cancer Institute, the American Cancer Society, and 20 other medical centers and organizations around the world.

The research combined data from 17 studies that included more than 12,000 people from the U.S., Europe, and Asia.

The study found that optimal levels of vitamin D for colon cancer prevention are higher than the current U.S. recommendation of 600 international units (IU) per day, which are based on bone health, said co-senior author Stephanie Smith-Warner, senior lecturer on nutritional epidemiology at Harvard Chan School, in a June 14, 2018 Washington Post article.

People with blood vitamin D levels above the recommended concentrations had a 22 percent lower risk of getting colorectal cancer, although it’s unclear what the optimal level of vitamin D might be for reducing the risk.

Colorectal cancer kills more than 50,000 people a year in the U.S. It’s the third most common cancer and the third leading cause of cancer-related deaths in the U.S.

Sources of vitamin D include sun exposure, fatty fish like salmon and trout, and foods such as milk and orange juice that are fortified with the vitamin.