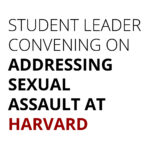 On Oct. 20, Henry Rosovsky, Ph.D. ’59 received an honorary Doctorate of Humane Letters from Asian University for Women. The connection between the longtime academic and leader of Harvard and a relatively young women’s university in Bangladesh may surprise at face value, but exemplifies Rosovsky’s commitment to enabling humanity to reach its highest potential.

Rosovsky made his first etch in what would become his deep mark on Harvard when he arrived as a graduate student in the late 1940s; since then, he has served as Dean of the Faculty of Arts and Sciences, Acting President, Chair and Professor of the Economics Department, and the Lewis P. and Linda L. Geyser University Professor at Harvard University. Widely recognized for his academic contributions in economic history and political economy, particularly of Japan, Rosovsky stands out amongst his peers not only for his sharpness of mind but also for his warmth of heart.

In 2000, Rosovsky chaired the Task Force on Higher Education and Society, convened by the World Bank and UNESCO, with Mamphela Ramphele, whose findings both spurred and supported the establishment of the Asian University for Women. Opened in 2008 in Chittagong, Bangladesh, AUW seeks to cultivate the region’s next generation of women leaders, identifying talented women from communities which offer few opportunities for advancement. AUW was founded by Kamal Ahmad, A.B. ’87 and Jack Meyer, M.B.A. ’69 in 2008, and has benefitted from Rosovsky’s guidance from its inception. In the company of Rosovsky’s life partner Nitza Rosovsky, former Harvard President Derek Bok, AUW alumnae Saren Keang and Jampa Latso, and AUW Support Foundation Board representatives Catherine Sasanuma and Kathleen Pike, Meyer and Ahmad presented Rosovsky with the degree of Doctor of Humane Letters, honoris causa.

AUW Co-founder Jack Meyer remarked, “Asian University for Women pledges in its mission statement to educate women to be skilled and innovative professionals, service-oriented leaders, and promoters of intercultural understanding who lead sustainable human and economic development. A true embodiment of these aspirations, Henry comes to mind as we consider how one person can combine these myriad mandates for a university graduate who gives back.”