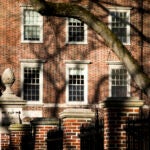 Over the course of its 133-year history, the prestigious Gifford Lectures delivered annually in Scotland have developed deep ties to Harvard University whose faculty — including Professors Diana Eck, William James, and Steven Pinker — have broken new ground in the studies of religion, science, and philosophy.

This year, Harvard Divinity School Dean David N. Hempton will further cement those ties between Harvard and Scotland and join the class of world-renowned scholars who have contributed to the advancement of theological thought through the lecture series.

Hempton, a historian of Christianity, will deliver his Gifford Lectures titled, “Networks, Nodes, and Nuclei in the History of Christianity, c. 1500-2020,” over the course of six days starting Oct. 4 at the University of Edinburgh. The principal question that will be explored throughout the lectures is: What difference would it make to reimagine the history of Christianity in terms of transnational networks, nodal junction boxes of encounter and transmission, and a greater sense of the core memes and messages of religious traditions and expressions? The lectures will also be posted on the HDS YouTube channel as soon as they become available.

“Historians of Christianity, even when innovative in theory and method, have mostly written within national, denominational, or institutional frameworks. Yet many of the most important changes and developments within Christianity have been transnational in scope, trans-denominational in character, and not easily contained within institutional or hierarchical structures,” reads a summary of the upcoming lecture series.

The lectures have been delivered since 1888 and were established by Adam Lord Gifford (1820–1887), a senator of the College of Justice in Scotland. The purpose of Gifford’s bequest to the universities of Edinburgh, Glasgow, St. Andrews, and Aberdeen was to sponsor lectures to “promote and diffuse the study of Natural Theology in the widest sense of the term — in other words, the knowledge of God.” Previous lecturers have included some of the world’s foremost theologians such as Reinhold Niebuhr and former University Professor Paul Tillich, philosopher Judith Butler, and scientist Carl Sagan.

Stewart J. Brown, professor of ecclesiastical history at the University of Edinburgh and vice-convener of the Gifford Lectureships Committee, praised Hempton for his scholarly work and contributions to the understanding of religion over the course of his career.

“Professor David Hempton was selected by the University of Edinburgh Gifford Committee for his eminence as one of the world’s leading historians of Christianity and historical theologians, whose work has greatly enhanced our understanding of Christianity as a global religion,” said Brown. “We look forward with great anticipation to his Gifford Lecture series, which will provide an original, highly important interpretation of a Christianity that has been transnational in scope, trans-denominational in character, and that has transcended institutional and hierarchical structures.”

In addition to Eck, Pinker, and Tillich, philosopher, psychologist and Harvard professor William James delivered one of the most famous series of Gifford Lectures, according to Brown. That lecture on “The Varieties of Religious Experience” remains a classic study of the philosophy of religion, said Brown.