Harvard wins 137th playing of The Game on last-minute touchdown 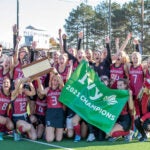 The Harvard football team capped the 2021 season on Saturday, Nov. 20 with an epic victory over Yale at the Yale Bowl in New Haven. The Crimson pulled off a thrilling 34 – 31 win in the 137th playing of The Game, scoring the winning touchdown in the last minute of play.

With the cancellation of Ivy League competition in 2020-21, The Game hadn’t been played since Nov. 23, 2019. The rivalry is the third most-played series in college football history. While Yale leads Harvard all-time with a record of 68-61-8, Harvard has won 11 of the last 14 meetings. The Game will return to Harvard Stadium in 2022.