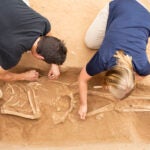 Where did the biblical Philistines originate?

A new study published in the Journal of Environmental Health found that around 65 percent of active natural gas storage (UGS) wells in the United States are located in suburban residential areas — not more sparsely populated commercial, industrial, or even rural areas like many new unconventional wells.

The study by Harvard C-CHANGE at the Harvard T.H. Chan School of Public Health helps provide a more precise understanding of the populations at risk to UGS infrastructure and the potential health and safety impacts in the event of a well failure similar to the 2015 Aliso Canyon blowout event. It is the first time, outside of California, researchers looked at how many people live near similar wells.

“As the U.S. transitions more toward natural gas to meet energy needs, it is critical that we fully understand the potential health, climate and safety implications along the entire natural gas supply chain,” said Drew Michanowicz, lead author and research fellow at Harvard C-CHANGE. “This work should help inform ongoing discussions around impacts and societal costs related to both current and future energy decisions.”

Gas storage systems pose a higher health risk when located near people due to the larger number of people that could be exposed to hazardous air pollutants or an explosion hazard. The natural gas leak at the Aliso Canyon well failure in October 2015 was the largest single accidental release of methane in U.S. history and led to the evacuation of thousands of residents within a five-mile radius. High-pressure storage of natural gas is highly flammable and can potentially expose residents to explosion hazards, and toxic compounds like benzene and formaldehyde. Long-term exposure to natural gas operations has been associated with respiratory illness, cancer, and fertility issues in women.

Methane emissions from natural gas also contributes significantly to the climate crisis. The Intergovernmental Panel on Climate Change (IPCC) estimates that we have a decade to cut emissions in half to avoid catastrophic climate change, yet natural gas production in the U.S. grew 11 percent in 2017 — the largest annual increase in production ever recorded.

“From a public health perspective, this new spatial method lets us determine precisely how close people live from a potentially hazardous pollution source or other hazard” said Jonathan Buonocore, co-author on the study and research associate at Harvard C-CHANGE. “We can now provide much more accurate estimates of populations at greatest risks to discrete environmental hazards like noise and air pollution, sea level rise, and explosion hazards, among others.”

Two-thirds of gas storage wells across the U.S. are currently doing a job they were not designed to do, which is withstand cycles of high-pressure gas injections and withdrawals — many through a single pipe without backup safety valves to prevent blowouts (i.e., “Aliso Canyon-type” wells). The new method created by researchers to identify populations at an individual household scale uncovered hyperlocal land use conflicts between homes and UGS wells in many of these areas — something previous studies were not able to do.