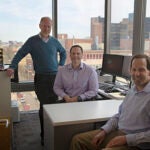 Three Harvard Kennedy School (HKS) graduates will be recognized May 20 during Reunion Weekend. The HKS Alumni Board of Directors will present the following individuals with awards:

In addition, the HKS Washington, DC Alumni Network will receive the HKS Regional Network Engagement Award for strengthening ties among alumni in Washington, D.C., while advancing alumni’s connections with the school.