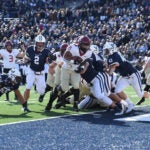 Harvard wins 137th playing of The Game on last-minute touchdown

As the temperature hovered above 40 degrees, Harvard students bundled up in their crimson spirit wear headed to the Yale Bowl for the 137th playing of The Game. But festivities began days before, as the College Events Board (CEB) planned a week of Harvard-Yale themed events leading up to the Saturday game.

On Monday, CEB hosted a Game Day featuring inflatables and games on the Science Center Plaza. The next day, students could let out their Bulldog bitterness by throwing axes, knocking down Yale bowling pins, and playing in a giant Mario Kart tournament. College student performers, including Dan Hasegawa ’22, Max Christmas ’23, 4Square, and the Yard Bops, provided live entertainment.

The annual tradition of roasting Yale took place Wednesday when members of the Harvard College Stand-Up Comic Society performed in the Smith Campus Center. The headliner of the event, Andrew J. Berry, lecturer in the Department of Organismic and Evolutionary Biology, presented a tongue-in-cheek slideshow titled “Why Harvard is Better than Yale,” where his statistical analysis clearly proved by the end of the night that Harvard beats Yale on every metric, from Nobel Prizes to post grad salary expectations. All jokes aside, the Bulldog Roast ended with complimentary Chick-Fil-A and bubbling anticipation for The Game.

Ailie Johnson ’24 said she felt very excited for the game as she missed out on cheering for athletic teams last year due to the COVID-19 pandemic. First year Graham Weber shared that enthusiasm: “Harvard will beat Yale…that’s the only option.”

Saturday morning, students eager to cheer on the football team boarded Harvard shuttles bound for New Haven, joining many others who had made the trip late Friday afternoon. With alumni and students alike celebrating the occasion at the tailgate before the start of the game, spirits were high. The referee blew the game whistle at noon after players lined the field.

The student section of the stadium turned red as Harvard students filled the seats and cheered. The Harvard cheerleaders and the band hyped up the crowd with chants, stunts, and songs throughout the game. Signs that read “Yale was our safety school” to “Yale students study for COVID tests” added to the Harvard scene. The two Ivy League teams proved to be an even match as touchdowns led to a close game. While Harvard led by three points at the end of the third quarter, Yale’s Darrion Carrington pitched a 27-yard touchdown to David Pantelis, putting the hosts ahead 31-27 with little under eight minutes left of game time.

In a dramatic turn of events, Luke Emge ’22 made a 12-yard touchdown pass to Kym Wimberly ’22 with 22 seconds remaining on the clock. Harvard won, 34-31, leaving Yale stunned. Students rushed the field loudly with cheers of triumph. The Game marked the end of the football season and the last Saturday before Thanksgiving Break.