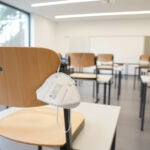 A spirited team of Harvard football players took the field in Harvard Stadium on Saturday, Nov. 13, but it wasn’t just this year’s squad. As the current roster of Crimson student-athletes concluded their 2021 home schedule with a 23 – 7 victory over Penn, a group of former players from the 2001 Ivy League championship team reunited on the field.

Nearly 50 alumni of the 2001 team gathered to celebrate the 20th anniversary of a remarkable season for Harvard Football. In addition to winning the league title, the 2001 squad went 9 – 0, a notable achievement for two very different reasons. While the record celebrates the first “perfect” Harvard Football season — with no defeats and no ties — in 88 years, it also spotlights the absence of the tenth game on a traditional schedule. The team never traveled to Worcester for the Sept. 15 Holy Cross game that year due to its cancelation as the country was reeling in the aftermath of 9/11.

On Saturday, the 2001 football team was honored on the field after the first quarter. Captain Ryan FitzGerald ’02 and his teammates returned to Harvard Stadium, this time with their families, to celebrate and reminisce about the collective history they made two decades earlier as undergraduates.