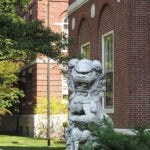 Harvard Extension School instructors Kevin Madigan, Marcus Stern, and Evan Kleiman have been awarded the Shattuck Award for their excellence in teaching.

Established by the Harvard Extension School in memory of Petra T. Shattuck, a distinguished and dedicated Harvard Extension teacher who died in 1988, these prizes are presented annually to honor outstanding teaching.

Kevin Madigan, Winn Professor of Ecclesiastical History at Harvard Divinity School, specializes in the history of Christianity and is a historian of medieval Christian religious practice and thought. He is the author of several books and studies, including “Medieval Christianity: A New History” (2015); “Olivi and the Interpretation of Matthew in the High Middle Ages” (2003); and “The Passions of Christ in High-Medieval Thought: An Essay on Christological Development” (2007).

Marcus Stern is a lecturer on dramatic arts at Harvard and associate director of the American Repertory Theatre and the ART/ MXAT Institute for Advanced Theatre Training. His directorial work with the ART has included “Endgame” (winner of the Elliot Norton Award for best large company production in 2008), “Donnie Darko,” and Adam Rapp’s Stone “Cold Dead Serious,” among many others. Stern has also taught at the Yale School of Drama, New York University, and Columbia University.

Evan Kleiman is a postdoctoral fellow in the Department of Psychology at Harvard. His research focuses on identifying inter- and intrapersonal risk and resilience factors for suicide. This includes constructs such as attributional style, gratitude, and social support. His research also focuses on stress generation and the integration of theoretical models of suicide.