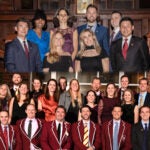 English concentrator William Lohier ’23 was awarded first place and a $4,000 prize by the National Council of Teachers of English (NCTE) in its national writing contest, “Celebrating Black Writers: Voices Calling for Activism and Social Justice.” The gifted writer, who was New York City’s Youth Poet Laurate in 2018, beat 47 other submissions to take first prize.

“I feel honored to highlight the work of Mary-Ann Shadd, an African American journalist, abolitionist, teacher, and publisher, and hope my work will spark an interest in the history of Black speculative imaginaries in the U.S.,” Lohier said.

The NCTE, in partnership with The Center for Black Literature (CBL) at Medgar Evers College and the University of Pittsburgh School of Education, invited students to participate in a national writing contest earlier this year. The contest received 94 submissions from high school students and 48 submissions from college students.

“The Center for Black Literature at Medgar Evers College, along with the National Council of Teachers of English (NCTE) and the School of Education at the University of Pittsburgh, are thrilled to support student writers who turn to fiction, poetry, and prose to advocate for activism, freedom, and justice through creative expression. The winners of this inaugural student writing competition, including William Lohier from Harvard College, represent the importance of Black writers chronicling commitments to civil and human rights. I applaud William and the other winners for their outstanding, award-winning writing contributions,”  said Valerie Kinloch, the 2022 NCTE president and dean of the School of Education at the University of Pittsburgh.

“I hope to continue writing about the work of Black writers who have inspired me and working on my own creative writing practice in my thesis and poetry workshops this semester,” he said.

Second place and a $2,000 award in the higher education tier was won by Sacramento City College student Marian Jones, who wrote “South Shade: An Astral-Activist Romance.” The two winners at the high school level were awarded a $3,000 prize and a $1,500 prize for first and second respectively.

This year’s writing contest was held in honor of the NCTE’s annual National Day on Writing, as well as the CBL’s 20th Anniversary Jubilee: Honoring Our Legacy and Celebrating the Black Literary Arts. Student contestants submitted essays, prose, or fiction on themes discussed by Black writers and intellectuals who advocated for social justice.

The NCTE was founded in 1911 in response to what was viewed as “overly specific” college entrance requirements and the effects those requisites had on high school English education. One hundred years later, the NCTE offers journals, publications, and resources; amplifies the voices of educators as advocates for their students; and provides teachers with opportunities to share research, teaching strategies, and lesson ideas.