Harvard chef cooks with, and for, the community 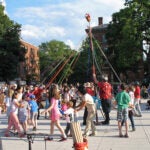 “I’m not someone who can cook for one or two people,” said Akeisha Hayde, executive chef for Residential Dining at Harvard University Dining Services. That’s a true dilemma for a chef who is accustomed to preparing food for thousands of undergraduates a day. So last week, Hayde turned her culinary skills toward feeding some of Boston’s homeless community. “My grandmother would expect nothing less,” she said.

As COVID-19 de-densified the Harvard campus, Hayde was among the many Harvard employees who found herself at home, keeping her two young sons on track with school and looking for a way to help her community through this frightening time. She was fielding calls from friends who were suddenly cooking more than they used to, which inspired Hayde to develop an online cooking class, The Trini Chef, complete with the hasgtag “#thetrinichef” on social media).

But as the toll of the pandemic rose, Hayde thought about the many vulnerabilities in the city. Prior to working at Harvard, she worked for food service companies at several area hospitals, among them Boston Medical Center. She remembered an encampment of homeless individuals near the hospital, which Hayde could only imagine had grown as shelters worked to both support individuals and to keep people safe from the virus.

“I bought some single serve food containers, and I cooked about 75 meals and packed them in warmers in the back of my truck. And I parked on Mass Ave, opened up the truck, and it only took a few minutes for people to take notice and start approaching,” Hayde said.

While Hayde’s young family helped pack up the food, she handed out the meals with just the help of a friend who felt especially motivated by a family connection to addiction and homelessness. “I was really focused on safety,” Hayde said. “All disposables, gloves and sanitizer and masks. But I know how important it is to have a meal with dignity, so we tried to take a minute with everyone.” Her carefully packed truck was empty within an hour, and Hayde is planning this week’s menu for even more people.

“I’m going to make pelau, which is pigeon peas, rice and chicken.” Hayde said. “And I’ll make some soup again, but this time enough for 100 servings. And I’ll try to do this once or twice a week. I’m so fortunate to work at Harvard — I’m still being paid, and I’m safe and healthy. I just have to pay that forward.”