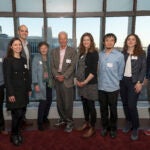 The Harvard Art Museums are pleased to announce an extraordinary gift of 70 sketchbooks by internationally renowned artist Otto Piene (1928–2014); the gift was made by poet and author Elizabeth Goldring, the artist’s wife. Dating from 1935 to 2014, the largely unpublished sketchbooks reflect interdisciplinary, cross-media experiments from Piene’s long career in the Boston area and abroad, including both realized and unrealized projects. In keeping with the museums’ history and ongoing commitment to training and research, the next Stefan Engelhorn Curatorial Fellow in the Busch-Reisinger Museum (2019–21) will soon be appointed to study and catalog this new gift.

The gift also includes a selection of pens, the primary medium Piene used for his sketches, including the Magic Marker brand; these will be held in the Center for the Technical Study of Modern Art (CTSMA) and will play a key role in the long-term preservation of Piene’s sketchbooks. Part of the museums’ Straus Center for Conservation and Technical Studies, CTSMA is dedicated to the study of materials and issues associated with making and conserving modern works of art.

“Elizabeth Goldring’s generosity will greatly benefit students and scholars from around the world,” said Martha Tedeschi, the Elizabeth and John Moors Cabot Director of the Harvard Art Museums. “This significant gift not only opens new research avenues but also broadens the offerings available in our Art Study Center, where both general visitors and scholars can make an appointment to view works of art like these exceptional sketchbooks. Providing this type of access to our collections is an integral component of our teaching and research mission.”

“The sketchbooks have found an ideal home in the Busch-Reisinger Museum,” said Lynette Roth, the Daimler Curator of the Busch-Reisinger Museum and Head of the Division of Modern and Contemporary Art. The sketchbooks complement the Busch-Reisinger’s existing holdings of works by Piene, which include a small early painting and two major fire gouaches. An early sketchbook was featured in the museums’ 2018 special exhibition Inventur—Art in Germany, 1943–55. “Throughout Piene’s career, sketching was a generative site for visionary large-scale projects and for material experimentation,” said Roth.

The sketchbooks strengthen the museums’ holdings of works by postwar artists — many, like the Group ZERO artists Heinz Mack and Günther Uecker, in an ongoing exchange with Piene. In addition, the Harvard Art Museums Archives holds the papers of the Howard Wise Gallery, the first gallery to exhibit Group ZERO in the United States. The museums also have strengths in international Fluxus art, including the Busch-Reisinger Museum’s near-complete collection of multiples by Joseph Beuys. The Fogg Museum’s Barbara and Peter Moore Fluxus Collection was also recently enhanced by an adjacent major gift from the nephew of artist Nam June Paik, a close collaborator of Piene. Made by Ken Hakuta, that gift included both works of art and the endowment of a new fellowship to support research on Paik.