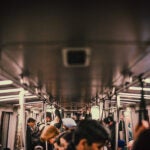 In New York, drop in commuters helped lead to a drop in COVID-19

The Harvard Art Museums have announced a gift of nearly 50 works by major figures in postwar German art from the collector Dorette Hildebrand-Staab, a member of the German Friends of the Busch-Reisinger Museum.

The works include drawings by such notable artists as Georg Baselitz, Joseph Beuys, Antonius Höckelmann, Jörg Immendorff, Imi Knoebel, Sigmar Polke, and Eugen Schönebeck, as well as a suite of prints and multiples by these and other artists such as Hanne Darboven, A. R. Penck, and Dieter Roth. Dating roughly from the 1950s to 1980s, these works were made when many of these now-renowned artists were students. In addition to the postwar works, a selection of late 18th- to early 19th-century etchings by German printmaker Carl Wilhelm Kolbe are also part of the gift.

“Dr. Hildebrand-Staab often purchased works directly from artists — Baselitz in particular, whose work she first saw in 1965,” said Lynette Roth, the Daimler Curator of the Busch-Reisinger Museum and Head of the Division of Modern and Contemporary Art. “Her gift thus offers evidence of a collecting practice around many of these artists as they emerged in Germany in the 1960s, long before they became known to American audiences in the early 1980s through New York gallery shows and museum exhibitions.”

Born largely during World War II and coming of age in the 1960s, the artists represented in the gift were among the first to deal directly with their country’s fascist past. They did so often via provocative, perverse, or humorous subject matter. In 1961/62, for example, Baselitz and Schönebeck collaborated on their “Pandemonium Manifestos,” lurid surrealist tracts that, like their imagery at that time, criticized German postwar society for suppressing the horrors of the Nazi period and the Holocaust.

According to Hildebrand-Staab, the gift is offered as a “bridge between the United States and Germany, in gratitude for American support of the country after 1945, but also to remind new generations of this longstanding relationship.”

The artworks build directly on Hildebrand-Staab’s earlier gift of a painting by Baselitz as well as two drawings (by Baselitz and Penck), donated as part of the Friends Anniversary Collection, a 2008 initiative designed to strengthen the Busch-Reisinger Museum’s holdings of art made after 1960. The museum is dedicated to the study of all modes and periods of art from central and northern Europe, with an emphasis on German-speaking countries.

“Dr. Hildebrand-Staab’s continued generosity and support of the Busch-Reisinger Museum will greatly benefit students, scholars, and visitors from around the world,” said Martha Tedeschi, the Elizabeth and John Moors Cabot Director of the Harvard Art Museums. “This significant gift broadens our collections and provides further opportunities for study and appreciation, integral to our teaching and research mission.”