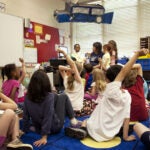 What the future of education looks like from here

The Harvard Art Museums have been awarded a $100,000 grant from The Andy Warhol Foundation for the Visual Arts to support the Fall 2021 exhibition ”Devour the Land: War and American Landscape Photography since 1970.” The exhibition will be the first to address the unknown and often unexpected ways habitats and well-being in the United States are affected by American warfare and the military-industrial complex. The grant, which was announced as part of the Warhol Foundation’s Fall 2020 grants program, provides general support for the project.

With more than 130 works across seven thematic groupings, the exhibition illustrates the national footprint of the military on the environment, the wide range of industries directly related to these activities, and the human impact of and responses to this activity. The exhibition finds its historic roots in the Civil War era, with images that show the devastation left by troops who were instructed by General William Tecumseh Sherman to ransack farms and indiscriminately set fires to eliminate the transportation and industrial infrastructure that sustained the Confederate Army. “We have devoured the land,” he declared.

While recognizing its links to a trajectory that originated in the 19th century, “Devour the Land” begins with the 1970s, a dynamic period for environmental activism and photography, and includes a concentration of works from the 1980s onward by an international roster of 53 artists.

“We are grateful to The Andy Warhol Foundation for the Visual Arts for their generous support of ‘Devour the Land,’” said Martha Tedeschi, the Elizabeth and John Moors Cabot Director of the Harvard Art Museums. “Photographs, for their part, are often described as bearing witness, a kind of silent and objective reportage on events both public and private. The artists featured in ‘Devour the Land,’ however, remind us that photographs are usually anything but passive documentation; they are an active invitation to look beyond the surface at what is unseen, a call to attention and at times a call to action.”

The photographers represented range from professional photographic artists and photojournalists to lesser known and emerging photographers, showcasing photographers involved in grassroots environmental movements and who address the intersection of issues of militarism, land use, land management, and public health. The project also highlights the people of color whose communities are often overlooked in environmental photography. Because these are the very communities that bear the most direct environmental effects of our militarized landscape, race is an inescapable consideration in this study.

“We are very pleased to support the Harvard Art Museums and the exhibition ‘Devour the Land.’ Its attention to historic and contemporary intersections of photography and environmental destruction frames a new and important consideration of both the reverberations of military aggression and the power of photography to capture and shift them,” said Rachel Bers, program director of The Andy Warhol Foundation for the Visual Arts. “The exhibition exemplifies the foundation’s belief that visual artists make vital contributions to social, political, and cultural conversations, opening new pathways of thought and action.”