Alumnae receive Heinz Award for ‘changing the world for good’ 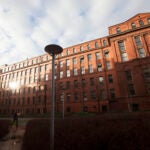 Harvard alumnae Amanda Nguyen ’13 and Sarah Szanton ’88 are among the five recipients of the 24th Heinz Awards announced on Sept. 12.

Created to honor the memory of the late U.S. Senator John Heinz, the awards honor achievements in five areas: arts and humanities, environment, human condition, public policy and technology, and the economy and employment. The two awardees will each receive an unrestricted cash award of $250,000 to honor their work.

Nguyen is the founder and CEO of Rise, a coalition of sexual assault survivors and allies. Her award was in the public policy category for her persevering activism on behalf of civil rights for sexual assault survivors, according to the Foundation.  She is recognized for her work in the development and enactment of the federal Sexual Assault Survivors’ Bill of Rights, the introduction and passage of similar legislation across the U.S. and internationally, and the development of the international Sexual Violence Survivors’ Rights Resolution currently under review by the U.N. General Assembly.

“In her pursuit of justice and through the founding of Rise, she is not only giving legal protections and a voice to those who have undergone the trauma of assault, she is establishing a social movement that reminds citizens of their right to petition Congress and contribute to the writing of new laws,” said Teresa Heinz, chairman of the Heinz Family Foundation.

Szanton co-led the development of the Community Aging in Place Advancing Better Living for Elders (CAPABLE) in Baltimore, Md. Her award was in the human condition category. CAPABLE provides low-income seniors with handyman services alongside in-home nursing visits and occupational therapy to improve health and mobility, restore dignity and independence, and decrease health care costs.

“Sarah has realigned the approach to care for older adults to recognize that human dignity is fragile and precious, and that protecting it is essential to health as we age,” Heinz said. “By allowing seniors to set their own personal goals for achieving a richer quality of life and providing services that enable seniors to live independently in their own homes, CAPABLE allows the whole person to be seen, not just their medical profile.”

“The recipients of this year’s awards are creating opportunities for individuals to access the foundations of a healthy, free and just society — well-paying jobs, a just legal system, equity of opportunity, and a life of dignity when we are not able to care for ourselves,” said Heinz. “These awardees have demonstrated not only innovative thinking, but also persistence, courage and an inspiring compassion for others. We are grateful to them for their contributions, which so beautifully exemplify the spirit of the Heinz Awards.”