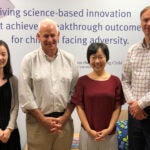 The Graduate School of Design (GSD) is pleased to announce the six winners of the 2019 Richard Rogers Fellowship, a residency program at the Wimbledon House, the landmarked residence designed by Lord Richard Rogers for his parents in the late 1960s. Now entering its third cycle, the fellowship is inspired by Lord Rogers’s commitment to cross-disciplinary investigation and engagement, evident across his prolific output as an architect, urbanist, author, and activist.

The six fellows named for the 2019 cycle were chosen from nearly 140 applicants from around the world. In addition to a three-and-a-half-month residency, each fellow receives travel expenses to London and a $10,000 cash purse. They will pursue research on a variety of issues, ranging from materiality of steel and brick in the city of London to historical and multimedia investigations of the city’s estates, markets, and edges.

The GSD introduced the Richard Rogers Fellowship in October 2016, and named its inaugural class of fellows in February 2017. Since its inception, the Richard Rogers Fellowship has drawn serious scholars from a range of fields and backgrounds to London, where they have engaged with that city’s great research and design institutions and studied topics including housing, social housing, and so-called “property guardianship”; food, cooking, and their role in city development; and the potential of computational and digital fabrication in large-scale urban construction.

The GSD has also engaged the Wimbledon House and the 2017 and 2018 Richard Rogers Fellows in salon-style discussions on London’s urban development and other topics.

In 2015, Lord Richard and Lady Ruth Rogers generously gifted the Wimbledon House to the GSD to ensure its continued use as a residence and site for experimentation and to provide research opportunities for future generations of practitioners and scholars.

Rogers designed the house in the late 1960s for his parents, William Nino and Dada Rogers. The pre-fabricated single-story dwelling features a bright yellow painted steel frame, glazed façade, and moveable partitions that allow the easy reconfiguration of the interior space. Considered one of the most important modern houses in the U.K., it was granted a U.K. Grade II Heritage listing in 2013. Rogers has described the house as a “transparent tube with solid boundary walls,” and noted its influence on his subsequent designs of the Centre Pompidou and Lloyds of London. Architect Philip Gumuchdjian oversaw the restoration of the house to its original state, completed in 2017. Landscape architect Todd Longstaffe-Gowan restored the house’s grounds.