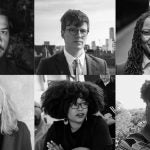 From an airplane or satellite, Picher, Oklahoma, appears as an anomaly in the endless green grid of agricultural land at the center of the United States. Huge irregular gray blots and dark pools interrupt the geometric precision of roads, and the colorful smear of Tar Creek runs diagonally through the town. Abandoned a decade ago — like its neighbors Cardin and Douthat, Oklahoma, and Treece, Kansas — Picher reveals a legacy of environmental indifference and staggering injustice.

Disincorporated and abandoned by 2010, vestiges of the towns remain among the toxic piles and sinkholes. Cleanup has been exceedingly slow, and until recently, members of the Quapaw Nation, who owned parts of the land, were excluded from the remediation effort. Quapaw tribal members had been forced by the federal government to sign unfavorable leases during the mid-1890s under the pretext that they were “incompetent,” incapable of using their own land profitably. Consequently, the Quapaw tribal members received none of the mining profits but were left with the toxic and hazardous waste when the mines closed.

GSD professor Niall Kirkwood describes this passionately as “a horrific story. . . 120 years of environmental injustice.” By design, the brutal legacy of the mines haunted his spring 2021 landscape architecture studio, “Tar Creek Remade: Environmental Legacy, Toxic Terrain and Re-Imagining the Future in the Tri-State Mining Area, Ottawa County, Oklahoma, USA.” From the beginning, Kirkwood challenged his 10 students to take on this immense problem of Tar Creek—a project “so utterly terrifying and so utterly complex that any sense of a resolution within a 15-week period is almost impossible”—with energy and creativity, but also realistically, anticipating small steps and a long time frame. It is crucial, he warned, to anticipate that progress will occur only “little by little” over centuries. Accordingly, their task was to “to go down to the micro-scale on the site. . .” and to propose “test experiments. . . they could scale up over the site — a hundred times, a thousand times, ten thousand times.”

In addition to many technical experts, Kirkwood invited two long-time participants in the Tar Creek evolution to advise the class. Rebecca Jim and Earl Hatley, Quapaw tribal advisors and co-founders of Local Environmental Action Demanded (LEAD), based in Miami, OK, are deeply familiar with the frustratingly slow progress and long time frame at Tar Creek. Since 1997, their non-profit organization has advocated for all the tribal and non-tribal communities in the area, pointing out that “the EPA and State of Oklahoma have spent more than $300 million at Tar Creek — yet the creek still flows orange, tailings piles still loom on the horizon and children are still poisoned by lead.”