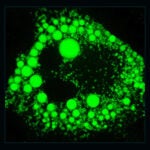 What might Harvard T.H. Chan School of Public Health look like if slavery and the oppression of Blacks and Native Americans had not occurred? That was the question that representatives from the School’s Office of Diversity and Inclusion posed to artist Lisa Rosowsky when they approached her about creating art for the Kresge Building’s Rosenau Atrium. Her response was Ghost Portraits, a series of eight black and white photographs printed on translucent fabric of notable African Americans and Native Americans in public health. Accomplished in their careers but minimized in history, their faces and stories are intended to create a dialogue with the portraits of the School’s deans and founders—all white men—that decorate the space.

The portraits were installed in conjunction with the Slavery & Public Health: Past, Present, and Future symposium, held May 5 at the School. The exhibit also includes a panel with biographies of the individuals, written by Rosowsky. They include Paul Cornely, the first African American elected president of the American Public Health Association, and Flemmie Kittrell, the first African American woman to earn a Ph.D. in nutrition.

“Lisa’s vision perfectly captured the sense of loss that framed the discussion we had on campus about the connection between the University, our work and slavery,” said Senior Associate Dean for Academic Affairs Meredith B. Rosenthal. Zennon Black, senior equity, diversity and inclusion manager, worked with Rosowsky to implement the project.

Rosowsky, a professor at Massachusetts College of Art and Design, creates mixed media and fiber art that often centers on history and loss. She describes her work as “giving voice to people who can’t speak for themselves.”

This is her second collaboration with Harvard Chan School. She and students from her community partnership design course recently worked with Gary Adamkiewicz, assistant professor of environmental health and exposure disparities, to design a book of information for new residents in green public housing.

Speaking about the Ghost Portraits during the symposium in May, Rosowsky said, “I would hope that viewers of this piece will come away with a broader picture of public health history in this country, and an understanding that to be seen one must be made visible.”

Afterwards, she was approached by an African American woman who is a staff member at the School. The woman said that she cried when the work was installed. She told Rosowsky, “at last I see myself here.”