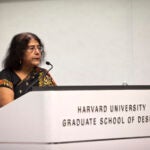 The Nobel Prize medal awarded to game theory pioneer and Harvard Kennedy School (HKS) “founding father” Thomas Schelling is being auctioned. The proceeds will be donated to a civil rights nonprofit.

Schelling, a 2005 Nobel Prize winner in economics, provided a new way of looking at issues as disparate as nuclear strategy, climate change, and addictive behavior, and at the height of his influence on public policy in the 1960s advised several U.S. presidents.

“As a scholar, Schelling made wide-ranging policy contributions to the well-being of humanity,” said Richard Zeckhauser, Frank Plumpton Ramsey Professor of Political Economy at HKS. Zeckhauser studied under Schelling as an undergraduate and later worked alongside him. Most notably, Zeckhauser pointed out, Schelling’s work “helped the world avoid the calamity of nuclear conflict. His body of thought continues to help societies combat racial segregation, address climate change, and curtail tobacco use. As a professor, Schelling multiplied his effectiveness by inspiring generations of students at Harvard and throughout the world.”

In addition to Schelling’s renowned work in the field of game theory, he was a major figure in shaping the modern Harvard Kennedy School. He helped design a new curriculum not simply intended for public administrators, but for a new generation of leaders literate in public policy. He also co-founded Harvard’s Center for International Affairs in 1958. It was renamed the Weatherhead Center for International Affairs in 1998.

Schelling made the decision to use his Nobel medal to support the Southern Poverty Law Center, an Alabama-based nonprofit legal advocacy organization, before he passed away in December 2016, according to his widow, Alice Schelling.

Other Nobel medals have been auctioned off for thousands or even millions of dollars, including those awarded to mathematician John Nash and scientists James Watson and Francis Crick. Speaking about Schelling’s passion for social justice, Zeckhauser pointed out that the plan to donate the auction’s proceeds to the SPLC is “a fitting testament to Schelling’s life, one dedicated to the betterment of humankind.”