Where did the biblical Philistines originate? 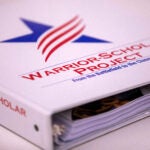 An international team from the Max Planck Institute for the Science of Human History and the Leon Levy Expedition Ashkelon announced this week in Science Advances the findings of a study to determine the provenance of the Philistines, utilizing state-of-the-art technologies on ancient bone samples unearthed during a three-decade excavation in Ashkelon.

Analyzing genome-wide data retrieved, for the first time, from people who lived in Ashkelon during the Bronze and Iron Age, the team found that a substantial proportion of their ancestry was derived from a European population. This European-derived ancestry was introduced in Ashkelon around the time of the Philistines’ estimated arrival in the 12th century B.C.

“This genetic distinction is due to European-related gene flow introduced in Ashkelon during either the end of the Bronze Age or the beginning of the Iron Age. This timing is in accord with estimates of the Philistines’ arrival to the coast of the Levant, based on archaeological and textual records,” said Michal Feldman of the Max Planck Institute for the Science of Human History, leading author of the study.

According to Daniel M. Master, director of the Leon Levy Expedition to Ashkelon and head of the archaeological team, the new genetic input from the direction of Southern Europe was found in bone samples taken from infants buried under the floors of their homes, as was the custom. “These infants were not travelers, they are the result of immigration and family building, thereby indicating that their parents did indeed come to the region from overseas in the 12th century B.C.” These genetic results are a critical step toward understanding the long-disputed origins of the Philistines.

From 1985 to 2016, the Leon Levy Expedition to Ashkelon, a project of the Harvard Semitic Museum and under license from the Israel Antiquities Authority, took up the search for the origin of the Philistines at Ashkelon, one of the five “Philistine” cities according to the Hebrew Bible. The excavations culminated in the discovery (2013-2016) of the first Philistine cemetery ever to be found. Led by its founder, the late Lawrence E. Stager, and then by Master, the team found substantial changes in ways of life during the 12th century B.C.E. which they connected to the arrival of the Philistines. Many scholars, however, argued that these cultural changes were merely the result of trade or a local imitation of foreign styles and not the result of a substantial movement of people.

This new study represents the culmination of more than 30 years of archaeological work and of genetic research utilizing state of the art technologies, concluding that the advent of the Philistines in the southern Levant involved a movement of people from the west during the Bronze to Iron Age transition.