For exceptional service to the LGBTQ community 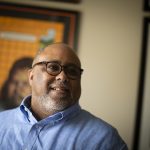 Professor Evelynn Hammonds has achieved many “firsts” in the space of diversity, inclusion, and belonging: she is the first openly gay, female, African American dean of Harvard College; first senior vice provost for faculty development and diversity at Harvard; founding director of the MIT Center for the Study of Diversity in Science Technology and Medicine; and many others.

“Early on in my career, I decided that I wasn’t going to live a fragmented life,” she said. “I’m committed to social justice for members of the LGBTQ community — and also for African Americans and women. I believe that to be productive and be a change agent, whether in the academy or in the wider world, you have to bring your full self to the work.”

This spring Hammonds experienced another series of firsts when, at Harvard’s first Lavender Graduation on May 23, the student group LGBTQ@GSAS bestowed the Evelynn Hammonds Award for Exceptional Service to BGLTQ+ Inclusion on its first recipients. By honoring Hammonds and those who follow her example, the group hopes to help make Harvard a place where more LGBTQ faculty, students, and staff feel that they, too, can bring their whole selves.

Evans added that the team has voluntarily taken on the responsibility of improving care for LGBTQ members of the University community for a decade. In the last year, he says, the group has been particularly responsive.

The group meets on a monthly basis during the academic year, working on issues such as gender-affirming medications and surgeries, HIV pre-exposure prophylaxis, and screening and treatment for sexually transmitted infections. Churchill has also run workshops for nursing and support staff at HUHS and has presented to his colleagues on issues of LGBTQ health.

“When I came to HUHS 20 years ago, one of my goals was to provide high-quality care to bisexual, gay, and lesbian patients. After a few years, I also began working with transgender and gender non-conforming individuals to provide gender- affirming care,” said Churchill. “Through that work, and with several other health care providers, the BGLTQ treatment team was started. We’ve come a long way and acknowledge that we still have work to do. This award affirms our work and energizes us to continue.”