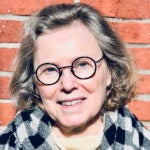 The clothing that firefighters wear to protect themselves from fire and other hazards may contain toxic compounds called perfluoroalkyl substances, or PFASs, according to a new study led by Harvard T.H. Chan School of Public Health.

In the study, led by Anna Young, a research fellow in the Department of Environmental Health at Harvard T.H. Chan School of Public Health, researchers analyzed dust samples from 15 fire stations in Eastern Massachusetts and found high levels of certain PFASs, with the highest concentrations in rooms where firefighters’ protective clothing, called turnout gear, was stored.

PFASs are man-made chemicals that repel oil, grease, and water. Known as “forever chemicals” because they don’t degrade easily in the environment, PFASs are used in a wide variety of products, such as stain-proof rugs, microwave popcorn bags, takeout containers, nonstick cookware, and water- and heat-resistant clothing, such as the coats and other gear that firefighters wear. PFASs have been linked to health problems including cancer, immune system suppression, diabetes, low infant birth weights, and reduced fertility.

“It is concerning that PFAS appears to be added to and contaminating the gear meant to protect [firefighters],” said Young in a Feb. 5, 2021, article in the Boston Globe. “We know these chemicals bioaccumulate and are harmful to our health.”