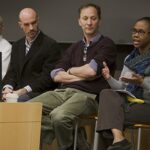 Countries with inclusive and responsive governing institutions—essentially, those that are more democratic—are also more economically successful.

That was one of the messages that 15 finance ministers from Africa and Latin America heard at the fifth annual Harvard Ministerial Leadership Forum for Finance Ministers, which took place April 23–26, 2017. Keynote speaker James Robinson, a political scientist and economist from the University of Chicago, presented overwhelming historical evidence suggesting that inclusive governance can help boost countries’ economies.

Robinson’s message resonated with the ministers participating in this year’s Forum, many of whom are from countries with predominantly youthful populations that are growing increasingly restive as they seek more inclusive and equitable institutional systems and more opportunities for economic advancement.

“We are balancing the pressure of expectations among our people with the capacity of our economy to create jobs,” said Yinager Belay, Minister of National Planning from Ethiopia.

The Ministerial Leadership Forum for Finance Ministers is held every spring as part of the Harvard Ministerial Leadership Program, a joint initiative of Harvard T.H. Chan School of Public Health, Harvard Kennedy School, and Harvard Graduate School of Education. The program also convenes annual forums each year for health ministers and education ministers. The program’s overall goal is to stimulate transformative vision, enhance leadership effectiveness and political acumen, and develop planning and execution capacity among ministers from Africa, Southeast Asia, and Latin America, who are invited to the program based on demonstrated leadership in their home countries.

Ninety-four ministers from 53 countries have participated in the program.