Film points kids to being heroes during COVID-19 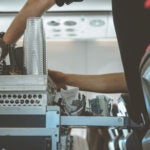 At a time when the lives of children around the world are being disrupted by the COVID-19 pandemic, the new animated short film “My Hero is You” shows them they can be heroes by taking small actions to stay healthy and protect those they love.

Researchers from Harvard T.H. Chan School of Public Health, Stanford Medicine, and the University of Texas Rio Grande Valley School of Medicine served as advisors on the film, which adapts a children’s book created earlier this year by mental health and psychosocial support experts from the Inter-Agency Standing Committee (IASC), the highest-level humanitarian coordination forum of the United Nations.

The book tells the story of a young girl’s interaction with a friendly orange flying creature who helps children understand basic concepts related to the pandemic.

In the film — which is told without dialogue — another young girl reads the book with her mother. She then dreams about meeting the creature and going on a journey. They visit children around the world, who are seen doing healthy acts including washing their hands, cleaning doorknobs, and practicing mindful, calm breathing, and invite them along for the ride. The film ends with the main character receiving love and support from her mother, showing the important role that caregivers play in helping children get through this difficult time.

While the children in the film are careful to stay six feet apart, they are not shown wearing masks, as global recommendations regarding mask-wearing for children vary by country. The filmmakers advise that families follow the guidance of their local public health agencies.

Shekhar Saxena, professor of the practice of global mental health at Harvard Chan School, was one of the film’s advisors. “‘My Hero is You,’ as a book was already a great story. Converting it into a film increased its attractiveness and reach while overcoming the barrier of language,” he said. “A worthwhile effort to get more children involved in protecting themselves and their families!”