Faculty recognized for teaching and mentoring 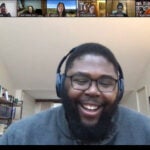 Brandon Terry and Jie Li received the 2020 Roslyn Abramson Award for excellence in teaching undergraduates. The annual award is given to assistant or associate professors and was formally announced at a May 5 faculty meeting.

Terry is an assistant professor of African and African American studies and of social studies. In the spring, he taught the Gen Ed course “Martin Luther King, Jr. and the Question of Conscientious Citizenship” and the introductory course for social studies concentrators. Terry’s current research focuses on philosophical foundations of the historiographical debates surrounding the African-American civil rights movement.

Li, John L. Loeb Associate Professor of the Humanities in the department of East Asian languages and civilizations, recently taught “Documenting China on Film” and the Gen Ed course “East Asian Cinema,” as well as two graduate seminars on media culture and representation of cities in China. Her book, “Utopian Ruins: A Memorial Museum of the Mao Era,” will be published in December by Duke University Press.

Recipients of the $10,000 prize are chosen each year based on their accessibility, dedication to teaching and research, and ability to effectively communicate with and inspire undergraduates. The prize was established with a gift from Edward Abramson ’57 in honor of his mother.

At the faculty meeting, the Graduate School of Arts and Sciences Student Council awarded the Everett Mendelsohn Excellence in Mentoring Award to Kathleen Coleman. Coleman is James Loeb Professor of the Classics and senior research curator at the Harvard Art Museums. The Everett Mendelsohn award is awarded based on student nominations and is given to faculty for excellence in mentoring graduate students.