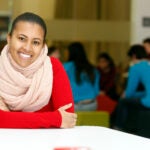 Presenting before an interdisciplinary audience on April 27 at Harvard’s Tsai Auditorium, Dr. Buhm Soon Park, professor of History of Science and Policy at the Korea Advanced Institute of Science and Technology, showed a slide of Édouard Manet’s “Races at Longchamp.”

Each new technology, Park explained, brings the thought that we are in a race: if “we” don’t do it first, somewhere, somehow, someone else will. That technology involves a horse race among scientists and nations was but one of the ideas critiqued at “Editorial Aspirations: Human Integrity at the Frontiers of Biology,” a three-day conference on April 26–28 co-organized by the Program on Science, Technology and Society (STS) at Harvard Kennedy School (HKS) and the Center for Biology and Society at Arizona State University (ASU). The goal was to examine the ethical and governance implications of human gene editing technologies.

To steer the race, one has to understand its context, including the spectators shown in Manet’s classic work. The event brought together a stellar cast of scientists, social scientists, ethicists, religious thinkers, legal scholars and policy practitioners to do just that.