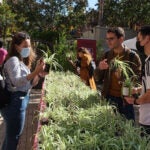 A SARS-CoV-2 variant with traits similar to that of the Delta variant — enhanced transmissibility and an ability to infect people who had previous infections/vaccination—will cause a more severe pandemic with more infections and breakthrough infections/reinfections than variants with either trait alone, according to a mathematical model created by researchers at Harvard T.H. Chan School of Public Health.

Their work, which was published online Nov. 19 in Cell, could help researchers and public health officials interpret the significance of novel and existing variants and design tailored public health responses for various scenarios based on a variant’s characteristics.

“Thus far, evidence of immune escape — the ability of a variant to evade the immune system and cause reinfections or breakthrough infections — has been a red flag,” said Mary Bushman, co-author of the Cell paper and a postdoctoral research fellow in the Department of Epidemiology at Harvard Chan School. “Our findings say it’s maybe more of a yellow flag — this is not such a big deal on its own. But when it’s combined with enhanced transmissibility, then it can be a really big deal.”

As the COVID pandemic has progressed, variants of the initial wild-type SARS-CoV-2 virus have emerged. To understand the effects that certain factors would have on a pandemic, Bushman created a model that simulates how pandemics fueled by hypothetical variants would affect populations that are using various combinations of masking with physical distancing, and vaccinations.

The analysis simulated a SARS-CoV-2 pandemic with several different hypothetical variants including combinations of the two traits: enhanced transmissibility, similar to the Alpha variant; partial immune escape, similar to the Beta variant; enhanced transmissibility with partial immune escape, similar to the Delta variant; and a variant with neither trait. The analysis also factored in how certain variables, such as masking/physical distancing or vaccinations, would affect the pandemic’s trajectory. For each of the scenarios, the researchers analyzed the total number of infections as well as the number/percentage of infections averted by vaccination.

According to the model, vaccination is also predicted to be highly beneficial in the case of Delta-like variants because vaccinations would prevent a greater number of cases that a more transmissible virus would potentially cause, and because the milder nature of breakthrough infections should substantially reduce overall mortality.

“It’s really important that people realize the emergence of variants like Delta make high levels of vaccination all the more crucial,” said William Hanage, associate professor of epidemiology and co-author of the Cell paper. “Even if we cannot eliminate the virus, we can ensure that people face it with the best preparation, and a more transmissible virus means there will be more infections in the absence of vaccination, so more people stand to benefit from it.