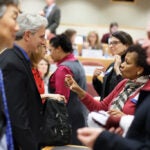 Melissa Dell, Assistant Professor of Economics and Public Policy, and Tommie Shelby, Caldwell Titcomb Professor of African and African American Studies and of Philosophy, have been named 2017 Andrew Carnegie Fellows.

Each of the 35 Carnegie Fellows receives up to $200,000 toward the funding of significant research projects and writing in the social sciences and humanities. The program recognizes an exceptional group of both established and emerging scholars.

“The health of our democracy depends on an informed citizenry, and our universities, academies, and academic associations play an essential role in replenishing critical information and providing knowledge through scholarship,” said Vartan Gregorian, president of Carnegie Corporation of New York. “The Andrew Carnegie Fellows Program is designed to support scholarship that brings fresh perspectives from the social sciences and humanities to the social, political, and economic problems facing the United States and the world today.”

The Carnegie Corporation was established in 1911 by Andrew Carnegie to promote the advancement and diffusion of knowledge and understanding. In keeping with this mandate, the Corporation’s work focuses on the issues that Andrew Carnegie considered of paramount importance: international peace, education and knowledge, and a strong democracy.