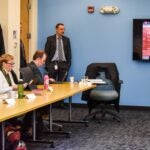 Widespread discrimination in America seriously threatens health and economic outcomes for millions of individuals and their communities—and these inequities should be spotlighted in the national discourse, according to Harvard T.H. Chan School of Public Health Dean Michelle Williams.

In a Nov. 24, 2017 op-ed in the Boston Globe, Williams cited a recent survey — led by Robert Blendon of the Harvard Chan School and conducted in collaboration with NPR and the Robert Wood Johnson Foundation — in which multiple ethnic groups in the U.S. reported facing pervasive discrimination. Discrimination “affects the job you will be hired for, your likelihood of renting an apartment or buying a house, whether you will be able to vote in future elections, and whether you are less willing to see a doctor for needed care,” Williams wrote.

She cited research by Harvard Chan School’s David Williams that has shown that discrimination over time can lead to stress-induced illness and even death, and other studies that have shown the negative economic impact of discrimination. These outcomes negatively affect American society as a whole, Williams wrote.

“If we cannot broaden the discussion, we will find ourselves in a situation where millions of people face serious health consequences…or lack opportunity, resulting in many minority groups being unable to function effectively in America’s changing economy,” she wrote. “Our country will be poorer and less just because of it.”