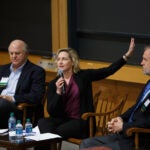 A new computer model that uses machine learning and de-identified and aggregated search and location data from logged-in Google users was significantly more accurate in identifying potentially unsafe restaurants when compared with existing methods of consumer complaints and routine inspections, according to new research led by Google and Harvard T.H. Chan School of Public Health. The findings indicate that the model can help identify lapses in food safety in near real time.

The study was published online Nov. 6 in npj Digital Medicine.

Foodborne illnesses are a persistent problem in the U.S. and current methods by restaurants and local health departments for determining an outbreak rely primarily on consumer complaints or routine inspections. These methods can be slow and cumbersome, often resulting in delayed responses and further spread of disease.

To counter these shortcomings, Google researchers developed a machine-learned model and worked with Harvard to test it in Chicago and Las Vegas. The model works by first classifying search queries that can indicate foodborne illness, such as “stomach cramps” or “diarrhea.” The model then uses de-identified and aggregated location history data from the smartphones of people who have opted to save it, to determine which restaurants people searching those terms had recently visited.

Health departments in each city were then given a list of restaurants that were identified by the model as being potential sources of foodborne illness. The city would then dispatch health inspectors to these restaurants, though the health inspectors did not know whether their inspection was prompted by this new model or traditional methods. During the period of the study, health departments continued to follow their usual inspection procedures as well.

In Chicago, where the model was deployed between November 2016 and March 2017, the model prompted 71 inspections. The study found that the rate of unsafe restaurants among those detected by the model was 52.1 percent compared with 39.4 percent among inspections triggered by a complaint-based system.

Interestingly, the study showed that in 38 percent of all cases identified by this model, the restaurant potentially causing foodborne illness was not the most recent one visited by the person who was searching keywords related to symptoms. The authors said this is important because previous research has shown that people tend to blame the last restaurant they visited and therefore may be likely to file a complaint for the wrong restaurant.