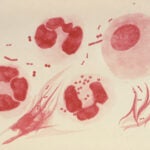 A new approach to kill superbugs

People with opioid withdrawal symptoms who seek help at a hospital emergency room often are referred to a psychological counseling program first instead of being treated with a medication, wrote Jun Nakagawa, a doctoral candidate at Harvard T.H. Chan School of Public Health, in a Jan. 30, 2018 WBUR.org commentary.

“A drug [buprenorphine] to treat opioid use disorder safely and effectively exists — but few ER providers prescribe it,” wrote Nakagawa, who is applying behavioral science to study this issue. Many physicians are trained to treat drug addiction by referring patients to detoxification programs for psychological treatment first, she wrote. “We know, however, that psychological treatment for addiction — when given by itself — often fails. Research has found that compared to those treated with medication, patients suffering from opioid addiction who receive only psychological support were twice as likely to die from overdose.”

The Opioid Crisis (The Forum at Harvard Chan School)