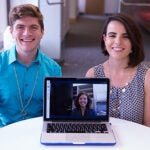 Colson Whitehead ’91 has gained a reputation as a literary chameleon, deftly blurring the lines between literary and genre fiction, and using his uncanny abilities to inhabit and reinvent conventional frames in order to explore the themes of race, technology, history, and popular culture that continually resurface in his work. In a country where reading habits and reading publics are still more segregated than we often care to admit, his books enjoy a rare crossover appeal. His first novel, “The Intuitionist,” is a detective story that regularly turns up in college courses; the zombie thriller “Zone One” drew praise from literary critics and genre fiction fans alike; “Sag Harbor,” about black privileged kids coming of age in the 1980s, was a surprise bestseller. In an era when commercial pressure reinforces the writerly instinct to cultivate a recognizable “voice,” his astonishingly varied output, coupled with highly polished, virtuosic prose, makes Whitehead one of the most ambitious and unpredictable authors working today.

Beyond the books, Whitehead swims effortlessly in the hyper-connected moment: he maintains an active presence on Twitter, where his sly and dyspeptic observations on the curious and the mundane have gained him a devoted following. A sampling includes sagacious tips for the aspiring writer—“Epigraphs are always better than what follows. Pick crappy epigraphs so you don’t look bad”—and riffs on Ezra Pound: “The apparition of these faces in the crowd / Petals on a wet, black bough / Probably hasn’t been gentrified though.” In the pages of The New York Times Magazine and The New Yorker, he has wryly dissected contemporary mores and the light-speed metamorphoses of language in the age of social media. In a widely shared essay from last year, he parsed the current attachment to the “tautophrase,” as in “you do you” and “it is what it is.” Or Taylor Swift’s popularization of “Haters gonna hate.” Swift makes an easy target, of course, but Whitehead takes aim at the rhetoric of those in power too, and the narcissism in our culture more generally. He’s more gadfly than moralist, but there is a Voltaire-like venom to his sarcasms. “The modern tautophrase empowers the individual,” he observes, “regardless of how shallow that individual is.”