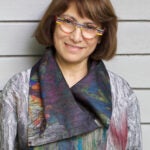 Extreme weather events spurred by climate change are likely to acutely affect human health—and may reverse decades of progress in lowering mortality rates for children under five, according to Ashish Jha, K.T. Li Professor of International Health at Harvard T.H. Chan School of Public Health and director of the Harvard Global Health Institute. He spoke at a panel discussion on climate change held Nov. 16, 2016 at Harvard Law School. Jennifer Leaning, François-Xavier Bagnoud Professor of the Practice of Health and human rights director, FXB Center for Health and Human Rights, moderated the panel.

Jha observed that the food insecurity caused by events such as droughts can potentially have far-reaching consequences. The Syrian civil war was preceded by an extreme drought that led to a massive internal migration into Syria’s cities, Jha said. The resulting spike in food prices and civil unrest led to civil war, mass migration out of Syria, the European refugee crisis, and its backlash. He tied these events to Great Britain’s vote to leave the European Union, and the recent presidential election in the United States.

“I think that there are a whole series of phenomena happening out there where we don’t connect the dots very clearly,” Jha said. “These things really are interconnected.”