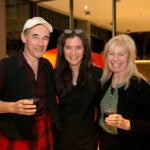 Initiative for the Science of the Human Past at Harvard (SoHP) SoHP@fas.havard.edu

A new groundbreaking study shows that warming planet will make dust storms more intense in the Mediterranean and the Atlantic.

Using the highest-resolution continuous climate record ever published, the study explains the connections between dust storms, extended periods of drought, volcanoes, and warming in the Mediterranean, Europe and Asia.

These ultra-high-resolution records revealed stronger Saharan dust storms during past warming periods, and provide a glimpse of what we may expect in the future. More intense storms will impact glaciers by making them darker so they absorb more heat. More dust in the air will worsen air quality and public health, while also affecting the frequency of North Atlantic hurricanes.

The study is another milestone in the collaboration between the Initiative for the Science of the Human Past at Harvard and the Climate Change Institute at the University of Maine. This interdisciplinary team of climate scientists, historians and archaeologists combined data from an ice core retrieved from the European Alps with highly detailed historical records. In the past, dust storms occurring at the same time as rainstorms were often recorded as “blood rain” due to the reddish color of Saharan dust.

The melting of glaciers caused by manmade climate change will contribute to erasing a vital source of information to study climate change itself, since ice from these millennia-old natural archives routinely reveal how climate patterns have changed over time and how climate will change in the future.

To address this crisis, the Climate Change Institute’s W.M. Keck Laser Ice Facility created a non-destructive system that allows preservation of the ice indefinitely, while providing climate data of the unprecedented ultra-high resolution which alone is compatible with detailed historical data. The new technology offers a truly transformative solution to both the study and the effects of climate change at the cutting edge of research. The article is published in JGR Atmospheres, a journal of the American Geophysical Union, the premiere professional association dedicated to the study of climate and environmental change.

The research presented in this study is supported by funding from Arcadia, a charitable fund of Lisbet Rausing and Peter Baldwin. All datasets on which the study is based are provided in open access to the public. In addition, support for method development and analysis was provided by the W.M. Keck Foundation and the National Science Foundation.