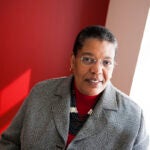 A checklist and coaching intervention to improve facility-based childbirth care and reduce deaths of women and newborns in India achieved significant gains in the quality of care during labor and delivery, but the improvements were insufficient to reduce death rates, according to a new study.

The BetterBirth study is one of the largest ever conducted in maternal-newborn health, with more than 300,000 women and newborns. It is also the first study to rigorously demonstrate large-scale, broad-based improvement in care during the 48-hour period of labor and delivery when women and newborns face the greatest risk of death and complications.

The study appears in the Dec. 14, 2017 issue of the New England Journal of Medicine.

The research was led by Ariadne Labs, a joint center of the Harvard T.H. Chan School of Public Health and Brigham and Women’s Hospital in Boston, in partnership with the Governments of India and Uttar Pradesh; Community Empowerment Lab in Lucknow, India; Jawaharlal Nehru Medical College in Belgaum, India; Population Services International, and the World Health Organization. It was supported by the Bill & Melinda Gates Foundation.

The quality of care around the time of childbirth has been recognized globally as a major contributor to the persistently high rates of preventable maternal and infant deaths in childbirth, even though more women are delivering babies at facilities.  The WHO’s Safe Childbirth Checklist was designed to target the seven major causes of death by helping birth attendants consistently follow basic practices such as handwashing and use of clean gloves to prevent infection.

In this randomized study conducted from 2014 to 2016, birth attendants and managers at 60 rural health centers in Uttar Pradesh were coached on use of the WHO’s Safe Childbirth Checklist … Sixty matched facilities that did not receive the intervention served as comparison sites … After two months of coaching, birth attendants completed 73 percent of the essential birth practices, 1.7 times better than the control arm at 42 percent … At twelve months, four months after the coaching ended, completion of checklist items persisted at 62 percent percent, 1.4 times better than control facilities, which remained unchanged. There was no difference between intervention and control sites, however, in stillbirths, seven-day newborn mortality, and seven-day maternal mortality and morbidity. Perinatal mortality, for instance, was 47 deaths per 1,000 live births in both groups.

“This was the first rigorous study of deploying checklists and coaching at large scale,” said Ariadne Labs Executive Director Dr. Atul Gawande, a Harvard Chan School professor and senior co-author, who helped lead the development of the Safe Childbirth Checklist with WHO. “The results demonstrated impressive behavior change. Now we in public health must identify the additional ingredients required to produce the complete recipe for saving lives at childbirth.”