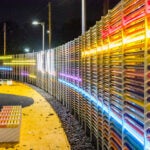 Charles M. Lieber, the Joshua and Beth Friedman University Professor at the Harvard John A. Paulson School of Engineering and Applied Sciences (SEAS) and the Faculty of Arts and Sciences (FAS) has been elected to the National Academy of Medicine.

Lieber, who is also the chair of the Department of Chemistry and Chemical Biology, has pioneered the rational synthesis of a broad range of nanoscale, wire-like materials and their applications in areas in ranging from electronics and computing to biology and medicine. In particular, he has led the field of nano-bioelectronics, creating nanowire electronic devices with powerful capabilities for ultra-sensitive, real-time detection of cancer markers and viruses, as well as the first nanoscale transistor tools capable of monitoring and modulating the behavior of individual cardiac and neuron cells. He developed a method of fabricating tissue-like mesh electronic scaffolds that can be injected via syringe to live animals. The mesh electronics, which seamlessly integrate in the brain, have been used to monitor neural activity, stimulate tissues, and even promote regeneration of neurons.

His research has created opportunities for fundamental neuroscience and could lead to powerful therapeutic tools capable of treating neurological and neurodegenerative diseases, as well as ameliorating declines in cognitive capabilities that come with natural aging.

Lieber is the principal inventor on more than 40 patents and an elected member of the National Academy of Sciences and the American Academy of Arts and Sciences. He is a Fellow of the Materials Research Society and American Chemical Society (Inaugural Class). He is Co-Editor of Nano Letters, and serves on the Editorial and Advisory Boards of a large number of science and technology journals. He received his undergraduate degree in chemistry from Franklin and Marshall College and his doctorate in chemistry from Stanford University.