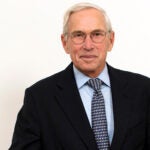 The Friends of Harvard Women’s Basketball Head Coach Kathy Delaney-Smith, who has led the program since 1982, coached her 40th and final season in 2021-22, which concluded March 11 with a semifinal loss in the Ivy League Basketball Tournament, hosted this year in Harvard’s Lavietes Pavilion.

Delaney-Smith finished her career with 11 Ivy League Championship titles, six NCAA Tournament appearances, and more wins than any other head coach in the history of the Ivy League, of either gender, in any sport.

In a career that ran parallel to the passage of Title IX, Delaney-Smith also fiercely championed gender equity, inspiring and impacting the lives of generations of Harvard women.