Can vaccines help fight the rise of drug-resistant microbes? 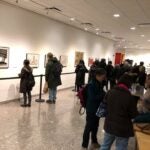 Some of the most important medications doctors have at their disposal have been rendered ineffective by parasites, viruses, and bacteria that have evolved resistance against them, and the problem is poised to get worse.

Drug-resistant strains of gonorrhea, salmonella, Escherichia coli (E. coli), and many other disease-causing agents are flourishing around the world, and the consequences are disastrous — at least 700,000 people die globally as a result of antimicrobial resistance (AMR) annually, according to a 2016 review on antimicrobial resistance commissioned by former U.K. Prime Minister David Cameron.

It’s a perilous situation, but several new studies from researchers at Harvard T.H. Chan School of Public Health indicate that an important tool in the fight against AMR already exists: vaccines.

The Proceedings of the National Academy of Sciences (PNAS) recently devoted a special feature section to examine the role vaccines can play in stemming the tide of AMR. In general terms, vaccinations can help lessen the burden of AMR in two ways: First, they can protect against the direct transmission of drug-resistant infections. Second, they can lessen the chances of someone getting sick, which in turn reduces the likelihood that they will be prescribed antibiotics or other medications. The fewer medications someone takes, the less likely it is that microbes will evolve resistance to the drugs.

“Despite the increased attention paid to vaccination as a response to AMR in recent years, it remains underemphasized in many cases,” said David Bloom, Clarence James Gamble Professor of Economics and Demography, who co-authored an overview article for the PNAS feature. “Vaccination potentially confers considerable value with regard to its ability to slow the development of antimicrobial resistance and mitigate its worst effects.”

As Bloom notes, AMR is not a new problem. Bacteria have been evolving resistance to antibiotics since the first doses of penicillin were administered back in the 1940s. In the past few decades, though, the burden of AMR has skyrocketed and there’s emerging evidence that some drug-resistant bugs are more aggressive or transmissible than their drug-susceptible counterparts.

Among the many challenges is that any use of antimicrobials, including common antibiotics, drives the evolution of resistance, even if the drugs are being used appropriately, Bloom said. Efforts to curb AMR have mostly focused on developing new antibiotics and other drugs. That’s certainly part of the solution, he said, but developing new drugs is a slow, costly process and it’s only a matter of time before the targeted parasites or bacteria begin developing resistance to the new drugs.