Calling on companies for civic engagement 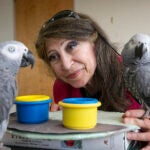 Around half of eligible voters in the U.S. cast a ballot during the 2018 midterm elections. In the same year, 80 percent of the approximately 3,500 Blue Cross Blue Shield of Minnesota employees voted. CitizenBlue, a 19-year-old civic-engagement initiative led by Blue Cross staff, is largely credited for the company employees’ impressive turnout.

Blue Cross Blue Shield of Minnesota is one of eight companies profiled in a new Ash Center for Democratic Governance and Innovation publication titled, “Civic Responsibility: The Power of Companies to Increase Voter Turnout.” Authored by Sofia Gross, Ash Center 2018-19 Technology and Democracy Fellow, and Ashley Spillane, M.C./M.P.A. ’18, the report details companies’ efforts to encourage voter participation and was the inspiration for a panel discussion hosted by the Center last week.

The event centered around the conclusion of Gross and Spillane’s report, that companies’ efforts to encourage voter participation, no matter the size, have a positive impact on voter engagement. Company efforts detailed in the report and described by the panel range in scope, from registration reminders to an Election Day holiday for employees.

At the start of CitizenBlue, said Samitt, “the primary focus was essentially sending reminders to associates to get out and vote. Now it’s much more compressive… We give folks paid time off to go and vote. We send out magnets to remind them about voting dates. We have photo booths with selfie contests and other things to create excitement and enthusiasm.”

Of course, not every company is prepared to jump straight in and deploy as many resources. Companies may be deterred by the “stickiness of politics” noted Goss Brown and feel they lack knowledge or experience. “We [GAP] make clothes and sell clothes. We’re not experts in voting laws and politics,” she said. But, in the end, “It’s better to do something than to do nothing.”

For all the companies represented on the panel and surveyed by Gross and Spillane, it was critical that voter engagement efforts were non-partisan. The panelists also drove home that civic engagement efforts should be authentic and tied to a company’s mission. “Our [BET Networks] mission is to entertain, engage, and most importantly, empower the African-American community here in this country,” said Mills. “And when you think about the issues that are the greatest challenge for our community … addressing those are contingent upon civic participation.”

Looking to the future, the panelists and Washington concluded that there are plenty of opportunities for companies to get started or increase efforts. “With the 2020 presidential election part of our daily conversation already, it is clearly not too early for companies to start thinking about how to encourage voters to participate,” said Gross.