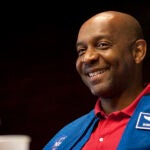 In celebration of Radcliffe Day 2020 and the 20th anniversary of the founding of the Radcliffe Institute for Advanced Study, Dean Tomiko Brown-Nagin will be joined by Drew Gilpin Faust, founding dean of the institute and former Harvard president, in a conversation exploring Radcliffe’s strategic direction and the role of an interdisciplinary institute for advanced study in catalyzing change at Harvard and around the world. The Zoom event, free and open to the public, is scheduled for 12:30 p.m. on May 29. Registration begins on May 11. Click here for more information.

“Twenty years ago, the Radcliffe Institute was created as a bold experiment, building on an important legacy. In its first dean, Drew Gilpin Faust, the Institute found a champion of both Radcliffe’s remarkable history and its ambitious new mission,” said Brown-Nagin. “As we planned Radcliffe’s next chapter — Radcliffe Engaged — we never imagined implementing it against the backdrop of a global pandemic. But we know that no matter what the future brings, we will work together to ensure that the values of inclusion, opportunity, and excellence that informed our founding remain at the heart of what we do.”

Brown-Nagin, an expert in constitutional law and education law and policy, is the dean of the Radcliffe Institute, the Daniel P.S. Paul Professor of Constitutional Law at Harvard Law School, and a professor of history in the Harvard Faculty of Arts and Sciences. Her book “Courage to Dissent: Atlanta and the Long History of the Civil Rights Movement” won six awards, including the Bancroft Prize. Brown-Nagin has previously served as faculty director of Harvard Law School’s Charles Hamilton Houston Institute and as codirector of Harvard Law School’s law and history program.

Faust is president emerita of Harvard — the first woman to hold that role — and the Arthur Kingsley Porter University Professor. Before coming to Harvard, she was the Annenberg Professor of History at the University of Pennsylvania. She is the author of six books, including “This Republic of Suffering: Death and the American Civil War,” named one of “The 10 Best Books of 2008” by The New York Times.