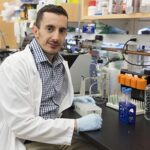 Bret Johnston, Paul and Catherine Buttenwieser Director of Creative Writing and senior lecturer on English, has won the 2017 Sunday Times EFG Short Story Award for his story, “Half of What Atlee Rouse Knows about Horses.”

“Great short stories achieve a breadth of meaning far greater than the length of their telling,” said Mark Lawson, one of the contest’s judges. “In Johnston’s story, a small patch of Texas cattle country opens up long vistas on love, death, memory and the survival instinct, human and equine. Johnston showed brilliance over the long distance in his novel, “Remember Me Like This,” and now proves equally adept at brevity. Small details from American and animal lives take on vast significance, and every line has the kick of a horse.”

Johnston was previously shortlisted for Ireland’s Frank O’Connor International Short Fiction Prize for his short story collection “Corpus Christie: Stories” and has received awards from the National Endowment for the Arts, the National Book Foundation, the Pushcart Prize, and the Virginia Quarterly Review. Johnston is the author of the internationally bestselling novel “Remember Me Like This,” currently being filmed for the big screen, and wrote the documentary “Waiting for Lightning,” which was released in theaters around the world.

The Sunday Times EFG Short Story Award, now in its eighth year, sees the award again cementing its reputation for showcasing both established and emerging writers.