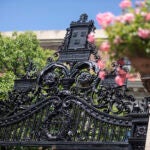 Harvard emeritus professor Benedict Gross was awarded this year’s Fudan-Zhongzhi Science Award by Fudan University and Zhongzhi Enterprise Group, which was founded jointly in 2015. It recognizes scientists who have made fundamental and groundbreaking achievements in physics, mathematics, and biomedicine.

Gross, the George Vasmer Leverett Professor of Mathematics and former dean of Harvard College, shares the award with Don Zagier from the Max Planck Institute for Mathematics. They won the honor for their work formulating and proving the Gross-Zagier formula, which relates the height of Heegner points with the central derivatives of the zeta function of the corresponding elliptic curves. They established striking cases of the Birch and Swinnerton-Dyer Conjecture, which brought many applications to long-standing problems, and deeply influenced the development of number theory in recent decades.

Gross received his A.B. and Ph.D. degrees from Harvard and taught at Princeton and Brown before joining the Harvard faculty in 1985. He has served as chair of the Department of Mathematics, and as a member of the Standing Committee on the Core Curriculum, the Educational Policy Committee, and the Committee on Admissions and Financial Aid. He also served as a member of the faculty committee that conducted the last major review of the Core Curriculum in 1997. Among his many awards and honors are the Cole Prize from the American Mathematical Society, and a MacArthur Fellowship (1986-91). In 2003, Gross was named dean of Harvard College and served in that roll until 2007.

As an undergraduate at Harvard, Gross concentrated in mathematics. He also played viola for the Harvard-Radcliffe Orchestra and in productions of the Gilbert and Sullivan players. He lived first in Adams House and then in Currier House, joining the first group of men to move to the Radcliffe Quadrangle in 1970. He was a recipient of a Sheldon fellowship after graduating, which he used to study music in Africa and Asia, and a Marshall Scholarship, which he took at Oxford University. Gross was known to perform viola with a string quartet regularly and is an avid tennis player and skier.

The 2021 Award is the second given in the field of mathematics. The laureates share around $450,000 donated by Zhongzhi Enterprise Group. The pair will accept the prize in Shanghai at a December event.