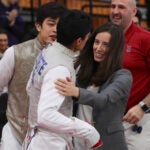 Two biomarkers based on DNA methylation (DNAm) were strongly associated with a person’s risk for heart attack and stroke, according to new research led by Harvard T.H. Chan School of Public Health. The two biomarkers, known as GrimAgeAccel and DNAmRS, were also significantly associated with overall risk of premature death.

The study, led by CuiCui Wang, a research fellow in the Department of Environmental Health at Harvard T.H. Chan School of Public Health, was published Dec. 4, 2020 in EBioMedicine. It identified five different DNAm-based biomarkers associated with aging and then analyzed these biomarkers in blood samples collected through two large cohort studies.

From a public health perspective, the team noted, GrimAgeAccel was the valuable biomarker for assessing risk of death, heart attack, and stroke and could serve as a useful tool for identifying elderly people at elevated risk for such events.