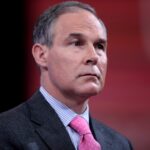 EPA proposal could derail use of new research

Nine-year-old Star Velasquez pulled a slip of paper from a container of water, her eyes lighting up with excitement as the black paper caught a glint of mid-morning sunlight and reflected a rainbow of color.

The experiment showcased the properties of super-thin films — nail polish dropped onto the top of the water spread into a nanometer-thick film that creates iridescent, rainbow colors on the paper.

Together with her second-grade class at the Gardner Pilot Academy in Boston’s Allston neighborhood, Velasquez learned about materials science during an outreach program conducted by students in the Research Experience for Undergraduates (REU) program at the Harvard John A. Paulson School of Engineering and Applied Sciences (SEAS).

In another hands-on experiment, elementary school children mixed blue and pink sand in water to learn about hydrophobic materials. The blue sand collected at the bottom of the water-filled beaker, while the pink sand, which was hydrophobic, reacted by clumping together when it hit the water to form a protective barrier.

Second grader Raul Galdamez, 8, said he had never seen anything like the clumping pink sand.

“I enjoy science because you can do experiments and learn new things about the world,” said Galdamez, who hopes to become an astronomer.

“This is my way of giving back, and it helps inflame my own passion for science,” said Kills Pretty Enemy, a senior majoring in microbiology at Montana State University. “This is all about planting the seed, especially for minorities, because there are not as many of us in the STEM field.”

She and Pablito are spending the summer conducting research on the microbiome in the lab of George Whitesides, Woodford L. and Ann A. Flowers University Professor. They are developing a fast and simple test for bacterial infections using a paper strip, similar to pH paper.