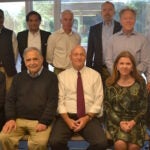 On Tuesday, Sept. 27 at 5:30 p.m., the Harvard Graduate School of Education hosts the first of its Askwith Debates. The conversation addresses the upcoming ballot proposal Question 2, which, if enacted, would allow the Massachusetts Board of Education to approve up to 12 new or expanded charter schools each year beginning in January 2017. Here’s what you need to know before the debate.
Background