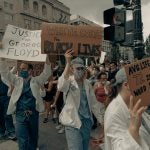 The Shorenstein Center on Media, Politics and Public Policy at Harvard Kennedy School awarded the 2021 Goldsmith Prize for Investigative Reporting to “Mississippi’s Dangerous and Dysfunctional Penal System” by Joseph Neff, Alysia Santo, Anna Wolfe, and Michelle Liu of The Marshall Project, Mississippi Today, Mississippi Center for Investigative Reporting, Jackson Clarion-Ledger, and the USA TODAY Network. The project investigated why the state is home to America’s most dangerous and antiquated penal system.

The Goldsmith Prize, founded in 1991 and funded by a gift from the Greenfield Foundation, honors the best public service investigative journalism that has made an impact on local, state, or federal public policy or the practice of politics in the United States. Finalists receive $10,000, and the winner receives $25,000. All prize monies go to the journalist or team that produced the reporting.

In awarding the 2021 Goldsmith Prize to the team behind “Mississippi’s Dangerous and Dysfunctional Penal System,” the judging committee noted their outstanding, deeply reported, data-backed storytelling, and the direct impact this series is having on public policy reforms in Mississippi. One judge noted that this series “shows in visceral terms why you can’t get ahead in a system like this.”