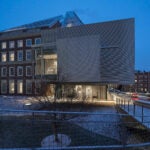 Harvard professor Andrew Knoll has been awarded the 2022 Crafoord Prize in Geosciences by the Royal Swedish Academy of Sciences.

The prestigious Crafoord Prize is a complement to the Nobel Prize, which the Academy also presents. The Crafoord Prize alternates every year between mathematics and astronomy, geosciences, biosciences and polyarthritis and consists of a gold medal and a sum of six million Swedish krona, about $650,000. It is one of the major international science prizes.

Awarded in partnership with the Crafoord Foundation in Lund, Knoll received the prize in geosciences “for fundamental contributions to our understanding of the first three billion years of life on Earth and life’s interactions with the physical environment through time.”

“This kind of award is beyond aspiration,” said Knoll. “I’m absolutely delighted and appreciative, but [as a scientist] you don’t get up in the morning thinking, ‘Well, maybe this year I’ll win the Craaford Prize [or any other major award]’. You get up because you’re curious about the world and want to know how it works. When someone bestows this kind of remarkable honor on you, all you can do is smile and say ‘Thank you’.”

Knoll, the Fisher Research Professor of Natural History and emeritus professor of Earth and Planetary Sciences, graduated from Lehigh University with a bachelor’s degree in 1973 and received his Ph.D. from Harvard in 1977. Knoll’s research focuses on the early evolution of life, Earth’s early environmental history, and how the interconnections between geochemical records of environmental change and paleontological records of biological history can be bridged.

“Even as an undergraduate, it dawned on me that in some ways Earth sciences and life sciences aren’t separate subjects,” Knoll said. “There are many things, including the history of our planet and the life it supports, that we’ll only understand when we can integrate physical, environmental, and biological perspectives. That’s what I’ve tried to do for many years.”

Knoll has helped expand our understanding of bacterial, eukaryotic, plant and animal evolution while pioneering stratigraphic applications of isotopic geochemistry. Knoll was also the first to hypothesize that rapid build-up of carbon dioxide played a key role in end-Permian mass extinction, 252 million years ago. And he served on the science team for NASA’s Mars Exploration Rover Mission.

Knoll is the author of five books including, “Life on a Young Planet,” which in 2003 won the Phi Beta Kappa Book Award in Science. His most recent book, “A Brief History of the Earth,” draws on his decades of field research to deliver a rigorous yet accessible biography of Earth’s 4.6 billion-year story.

Other awards Knoll has received include the Walcott and the Mary Clark Thompson medals of the National Academy of Sciences, the Paleontological Society Medal, the Wollaston Medal of the Geological Society of London, and the International Prize for Biology.

Knoll will be presented the Craaford Prize in April during a multi-day festival at Lund University in Sweden called Craafoord Days.