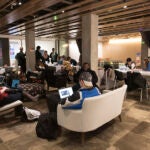 Students discover ‘Oasis’ in the Yard

Music critic and MacArthur Fellow Alex Ross will give the Harvard University Department of Music’s 2018 Louis C. Elson Lecture, “Wagner, Hitler, and the Cult of Art.”

Ross  has been contributing to The New Yorker since 1993, and he became the magazine’s music critic in 1996. He writes about classical music, covering the field from the Metropolitan Opera to the downtown avant-garde, and has also contributed essays on pop music, literature, twentieth-century history, and gay life. His first book, “The Rest Is Noise: Listening to the Twentieth Century,” a cultural history of music since 1900, won a National Book Critics Circle award and the Guardian First Book Award, and was a finalist for the Pulitzer Prize. In 2013, the Southbank Centre, in London, mounted a yearlong festival inspired by “The Rest Is Noise,” involving more than a hundred concerts. His second book is the essay collection “Listen to This.” He is now at work on a third book, called “Wagnerism,” describing the composer’s vast cultural impact. In 2008, he was named a MacArthur Fellow; he has also received an Arts and Letters Award from the American Academy of Arts and Letters and the Belmont Prize in Germany. Ross writes the blog, “The Rest is Noise.”

“Wagner, Hitler, and the Cult of Art,” takes place Thursday, April 19 at 5:15pm, at John Knowles Paine Concert Hall, and is free of charge.